Every company has their own escape room game introduction, that they perform either through video or by a game master. But many escape companies still struggle with getting it right.

I’ve talked with many escape room owners and game masters about how they run their introductions to their games. It’s an opportunity to discuss the story of the game and to run over the rules. It’s extremely important that a game master sets out rules that the players should follow, to prevent breakages and to make sure they enjoy the escape room game!

A framework for introducing an activity is a great way to get yourself started when you are drafting a “speech” for your game masters.

Introduce the Activity – the academic method of bringing a new activity to students, the same methods can (and should) be followed when introducing your game to players!

An escape room game introduction can be done through video format or by a game master when talking to players directly. Some companies do their introduction in their lobby space, while others have dedicated spaces for introductions.
You may want to consider how your company will do introductions and rules when you are designating spaces of the facility. Standing inside the game and asking players to listen to you while you read them rules is not going to work. As soon as players are inside the game, they’re looking for clues not listening to rules.

But to help you out as you craft your own introduction and rules for your games – I’ve created a document just for you! 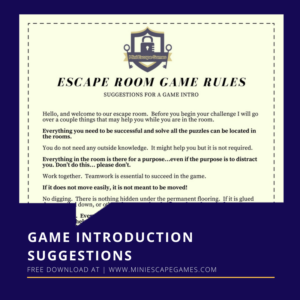 This document is a list of lines that a game master may use during their introduction spiel.

a usually high-flown talk or speech, especially for the purpose ofluring people to a movie, a sale, etc.; pitch.
Dictionary – “Spiel” Definition