To win in an escape room game you need a versatile team. You can’t have too many people who bring in the same group of strengths so you mix it up and balance it out as much as you can. Real escape room players bring different skill sets, which means different perspectives which then helps immensely in problem-solving. Nothing will hold you back more than all of you bringing the same thing to the table and getting stumped on the same challenge. When you look at any team you are getting more than just five random individuals. Without a doubt, you are also sure to get some specific types of real escape room players. The Escape Enthusiast is exactly what you look for when forming a team. These are the people that give everyone advice before you walk into the game. They may have been the one who booked the game in the first place! Even though they might not be the most skilled they will enjoy the game. The Enthusiast already has some experience under their belt and knows what to expect but haven’t got to the point they know everything and spoil it for everyone else. The Escape Enthusiast is great for team morale especially when you take those major losses and you’re still stuck with ten minutes left. They understand how escape room games work and are great at keeping the team focused throughout the game! Just don’t disappoint them, they’ll be sure to tell other people. 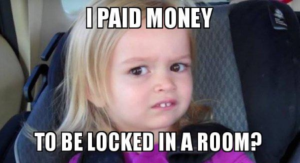 This is probably the first escape game your Newbie has ever played. A lot of times they were invited because your normal teammate couldn’t make it and you needed a fifth guy to fill up the slot. The Newbie is extremely easy to spot because they are the ones asking all the questions you would find out after playing one game. They walk into the game and are extremely confused for the first five to ten minutes. They look at all the locks and keys, the combinations and numbers everywhere, and wonder what they have agreed to. A good number might not get the game and wonder why there’s that one person who shrieks every time a lock is opened. However, if they play it with good teammates who show them the ropes they might begin to appreciate the complexity of the games and come back for a second time.

This is the team cheerleader and dynamite in a box. The Woo girl gives you just that every time you do something. For some reason, despite the 10 games they have played the Woo Girl has never had the novelty wear off on her, every single puzzle is something new. Open a room door “Woo!” Open a single lock “Yessss!” Come up with an idea “Ahmazing!” get eaten by the zombie “Woo!” Their enthusiasm knows no bounds. Most of the times they are not very good at the game but really enjoy it and so can only afford to give moral support with a deafening “Woo-hoo!” Plus you can’t ignore that much excitement and enjoyment in the game. You can’t help but be excited along with them!

The Logical Genius has mastered every single puzzle there is out there. If you have an alpha-numeric code or who-dun-it kind of puzzle they are the ones who will solve it for you. A lot of times the Genius does not perform well under pressure and will need you to maintain silence for them to work. They don’t like it when other players watch over their shoulder or try to give suggestions on how to solve the puzzle. They will not understand the excitement of the Whoo Girl and why someone is cheering with every lock that is picked because for them it’s about solving a puzzle and moving onto the next one. 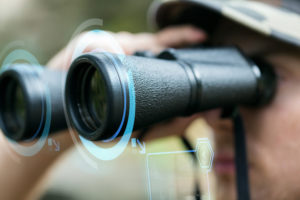 The Hunter doesn’t have the problem-solving logic skills of the genius but they make up for it with their enthusiasm and clue finding skills. As soon as they step into the game they begin looking, under – behind – beside – between, it doesn’t matter if they don’t know what they’re looking for, they’re hunting. It doesn’t matter what the situation is they can hunt for clues like no other can. If keen sense of “smell” doesn’t work out then they’ll turn the room upside down looking for them. They can find the hidden relics at all costs and are a Logical Genius’s perfect match-up as they can scour the room as their friend cracks the codes.