Standing in the middle of Old Port Montreal in the 30+ degree weather, I found myself questioning if I was in the right place or not. I was surrounded by bustling tech entrepreneurs and networking ninjas and there I was with my vague idea of creating escape games for everyone. I didn’t have an app, I wasn’t hunting for an investor, I just wanted to learn from fellow entrepreneurs and bounce ideas past people. But I felt like an outsider in a world I didn’t know.

About two weeks ago I joined Invest Ottawa for an exciting journey to Montreal for StartupFest, a gathering of “the world’s best entrepreneurs, founders, investors, and mentors”.

From an all-star speaker lineup, to investment prizes, there is something for everyone https://t.co/NG0E8zV4yI July 13-16 join us in Mtl!

Invest Ottawa had organized their now annual #HustleShuttle, a bus trip to and from Montreal for the StartupFest event where Ottawa-based entrepreneurs and startups could network and practice their pitches. Attendees got the chance to mingle – as much as you can on a bus flying down the 417 – and get advice from Ottawa pros.

They made us stand at the front of the bus and give our pitch. Too bad I had no idea what to say but I think I made it okay. Something about escape games, niche industry, fun stuffs, etc.

It gave me a chance to learn about some of the great work being done in Ottawa, and gave me a glimpse into the app heavy world I was heading into. On the #HustleShuttle bus alone, apps like the ones below were amazing me with their creativity.

What Did I Do At StartupFest?

Over 3 days in outrageously sunny Montreal, I wandered and listened. I observed people and soaked in the exciting bustling atmosphere of a waterfront promenade filled with people wearing special pink lanyards. Entrepreneurs and founders were happy conversation companions and I tried desperately to find people who were similarly interested in gamification, entertainment, and fun stuffs. I listened to panels and speakers on a variety of topics.

Mainly I took the time to think. I considered my business ideas, my entrepreneurial plans, and how I could put them into action.

What Did I Learn at StartupFest?

First off, I learned that people really like apps. They were everywhere, and everyone had an idea for the next cool app. I heard some amazing ideas and some not so amazing ideas. I talked with startups that were in initial stages of development and heard from founders with apps seeking further stage funding.

In addition, I experienced the “speed-dating” of StartupFest. I was greeted by complete strangers who sought out my name and credentials on my lanyard, then asked “So what’s your startup do?”. As soon as the stranger learned I did not have an app, or money to spend, they vanished. *poof* It was abrupt and a little disconcerting, but some of the attendees of StartupFest had specific goals they had to achieve. And I could not help them with those goals.

Had a great time meeting people @startupfest in Old Montreal. Thanks for the warm welcome. #Startupfest pic.twitter.com/SyWPebjbLK

Then I met incredibly friendly people, who welcomed the opportunity to chat about my ideas and their ideas. I spoke with founders who excitedly went on at length about their startup plans and development. I could see the passion in their eyes and felt energized by their focus and drive. They listened to my rambles about escape games and validated my ideas with positivity and constructive criticism.

I attended several panels and speakers where I learned some, and hoped for more. These 3 events stick out the most in my mind, as I drifted in and out of the 3 different tents featuring speakers.

Am I Happy I Went To StartupFest?

Thanks @Startupfest! So much brain food… #startup#montreal#startupfest

Despite the heat and the rain, despite my lack of app or tech-based industry, I felt welcomed at StartupFest. I felt like an outsider peering in, grabbing information and adapting it to suit my purpose. Most of all, I left StartupFest inspired and excited for the future of Mini Escape Games. I didn’t clarify my startup plan, but I knew I was on the right track.

I Know I am on the right track. 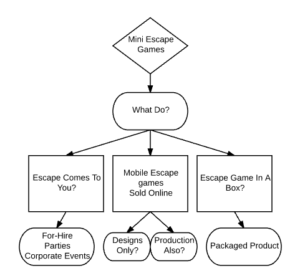